Would you like to switch to the accessible version of this site?

Don't need the accessible version of this site?

The Four Phases of a Whiplash

During an automobile accident from the rear, your body is projected into a very quick and strong motion of acceleration and then deceleration.  Ironically, all of the phase of whiplash occur in less than one-half of a second. Each phases has a distinctive force acting on the body that contributes to the overall injury, and with such a quick and intense 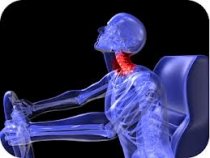 movement, injuries to the vertebrae, nerve tissue, intervertebral discs, muscles, and ligaments of your spine can be quite serious.

Once impact occurs you are in the first phase. As the first phase happens your car begins to be separated from the seat of your car, causing your mid-back or thoracic spine to lose it's curve or flat out by being press up to the back of your seat.  The resulting force causes an upward of force into your neck, by contracting your discs and joints. As your seat starts to go forward your torso continues, your head moves backward, creating a grinding like force in the neck.  If your head rest is not adjusted to the correct level trouble can ensue, the distance and thus force your head travels with a head rest makes the impact less severe.  However, most of problems or damage that will be applied to the spine will occur before the head will ever hit the head rest. Recent literature has shown that head rest only reduce the risk of injury up to 20%, so accidents will cause damage not matter what.

During the second phase, your body has achieved maximum acceleration - 1.5 to 2 times that of your vehicle itself. So your body is traveling faster than your car, but the head and cervical spine has not had any forces of accelerate applied to it thus it continues to move rearward.  An abnormal S shaped curve develops in your neck as the seat back moves forward, much like a diving board, adding to the forward acceleration of the torso. Unfortunately, this forward seat back recoil occurs while your head is still moving backward, resulting in grinding force in the neck which is one more thing to consider during injuries of an auto accident.  Many of the bone, joint, and discs injury frequently have during this phase that we see in our Frisco chiropractic office.

The third phase is when your torso is now going back into your seat and your head and neck have maximum acceleration. This is the same time the car is slowing down.  During the first phase it is possible that the force on the brake pedal was loss due to the shear force. However, because of the motion of the body it will be applied again during this phase. If the brake is applied in the third phase the brakes causes your car to slow down even more rapid and increases the severity of the whiplash injury of cervical spine.

The forth phase is usually the phase where most of the damage occurs during the whiplash phenomenon.  In the last phase, the body is halted by the seat belt and your head is free to move forward without anything stopping it. This results in a violent forward-flexion of the spine, stretching the tissue beyond what is normal and injuring them, ripping annular fibers in the spinal discs, and pulling vertebrae from their normal resting place. The nerve roots and spine cord get stretched beyond what they are accustom to thus causing irritation, and your brain could strike the inside of your skull causing a brain injury.  If you are not wearing your seatbelt during the time of the accident, you could suffer a concussion or brain injury from colliding with the steering wheel or windshield.

December Newsletter: Custom Orthotics Could Be What You Need to Fight Foot Pain

Are your feet killing you? Orthotics could end your pain. ...

Worried about gaining weight during the holidays? The healthy eating tips will help you avoid piling on the pounds. ...

November Newsletter: It's always a good idea to visit your chiropractor after an auto accident

Feeling sore after a car accident? Give your chiropractor a call. ...

November Newsletter: Dealing with back pain? A herniated disc could be the cause

Got stubborn back pain? You may have a herniated disc. ...

Jaw Pain? You May Have TMJ

Could your jaw pain mean that you have TMJ? ...

Too Much Tech Could be Causing Your Neck Pain

Wondering why your neck hurts? Your tech habits could be the reason. ...

The Benefits of Chiropractic for Heart Health

Back to School Chiropractic Care

Want to make the return to school a more pleasant for your child? Schedule a visit with the chiropractor. ...

Don't Let Back Pain Get You Down This Summer; Chiropractic Can Help

Spending too much time on the couch due to back pain this summer? Chiropractic treatment could help you salvage your summer. ...

Tired of living with osteoarthritis pain? Your chiropractor may be able to help. ...

Reviews By Our Satisfied Patients